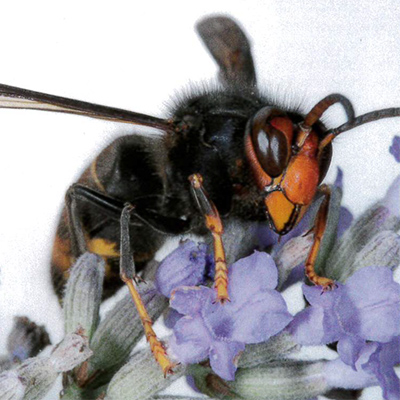 The Asian Hornet is a non-native species

Report sightings of this species to alertnonnative@ceh.ac.uk

A highly aggressive predator of native insects. Poses a significant threat to honey bees and other pollinators.

Nests usually high in trees and man made structures, sometimes close to the ground; hunts honey bees, other insects and also feeds on fruit and flowers.

Not easily confused with any other species. Dark brown or black velvety body. Characteristically dark abdomen and yellow tipped legs. Smaller than the native European Hornet.

Introduced to France in 2004 where it has spread rapidly. In 2016 the first UK sighting was confirmed in Gloucestershire. Since 2018 several nests in the UK have been found and destroyed. BeeBase are advising all beekeepers to set up Asian Hornet traps in their apiaries. Click here for advice on how to make your own trap.

Do not disturb an active nest. Members of the public who suspect they have found an Asian hornet should send a photo to alertnonnative@ceh.ac.uk