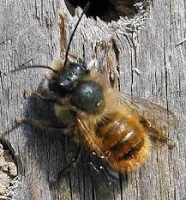 There are about 240 different kinds of solitary bee in the UK. Many are tiny and hardly recognisable as bees but there are a number which are similar enough to honey bees for them to be mistakenly identified. Solitary bees do sometimes nest communally but they don’t fly for very long and do not sting.

These bees look similar to honey bees but perhaps a little smaller and they will nest in a variety of aerial locations including airbricks and small holes in masonry. This year there have been many reports of bees in breathing tubes for cavity walls and in holes in doors.

These bees are harmless and only fly between late April and May. They lay eggs in holes and seal them up with mud to hatch outnext year. These are usually the bees which take up residence in the bee-nests bought in garden centres.

They are charming insects and very good for pollinating apples and pears as well as a wide range of other flowers.

There is no way to remove them alive, so if they appear in places that you cannot tolerate the only thing you can do is to seal up the holes. 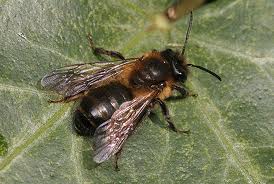 There are many different kinds of mining bee. Some are known as lawn bees and range in size from 0.5 to 1.0 cm. The adults bees only fly for a short period in April and some more a little later in the summer. They are harmless.

There have been quite a lot of reports this year about a mining bee (shown here) which closely resembles a honey bee called Andrena Scotica, although it is also known as Andrena Carantonica.

Although it is a solitary bee you often find several sharing the same hole in cracks in the mortar under patios for example. They have a furry thorax and the abdomen is slightly wider and darker than a honey bee.

They are not aggressive and only fly for a short period in the year so they will not trouble you for long. They will not sting unless squished.

There is no way to remove them without killing them. If you cannot tolerate them where they are the only thing you can do is to fill in the holes.